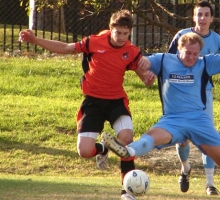 Player profiles are something that the club’s looking at expanding on in 2012 to give club members an insight into different players in different teams. We’ll be looking to put up a different interview every week, so stay posted on our Facebook to see who’s next!

It’s fitting that we profile speedster Kai Alagich, a member of our Wakehurst Premier League Squad for 2012 who talks to us about the teams goals for the season, the pressure of up and coming youth players and why he will always wear #3.

Premier League’s is getting stronger every year. What are the squad’s goals for this season and do you think you can overcome state champions Pittwater?
This yeah we will be aiming for no less than top 4, make it to the final and to go as far as we can in the FA cup. We’ve shown in patches that we can match Pittwater, it’s more about doing it more consistently throughout the year, and putting away the lower teams.

This is Jurgo’s 3rd year in charge. Tell us a bit about how he’s transformed the squad over this time and what he’s like as a coach.
Jurgo’s inherited an ageing premier league squad, and each year he has done well to bring in a good number of young guys, whilst still keeping the core of the senior boys. Paul is definitely a man manager; he is all about positivity and getting the best out of you.

You spent your youth playing at Manly Utd. What made you want to come to the tigers after so many years?
I’d just finished U18s and was pretty tired of rep football, and the head coach at the time Gary McGuinness had just agreed to coach Wakehurst PL’s the following year. I was training with a mate at Strikers, Gary gave me a call, offered me a spot and that made my decision.

You’re obviously part of a new guard at Wakehurst along with the likes of Changa, Russ, Nick Ball, Mike Ball and so forth. What’s the most important balance to have in the squad?
You obviously need the mix of old and new, guys who have played PL’s for a number of years, and the young guys to freshen up the squad. Paul has seemed to time bringing the young guys into PL’s very well, guys like Sammy and Changa (Mike Wood) spent time in Ressies before stepping up, and in the next couple of years there could easily be half the Ressies squad playing PL’s.

What’s your playing number and why?
I will always wear number 3, no matter how much it costs me at shirt auction. I wear 3 because I used to love watching Roberto Carlos on the left.

Are the boys feeling the pressure to perform each year with the amount of talented division 1 teams coming through the youth system?
I wouldn’t say there’s much pressure, more the fact that when they finally do finish up at PL level, we leave knowing that the squad is in a good position at the time and for many more years.

PL’s matchday is being transformed this year, the club has agreed to hire DJ’s to play as goals are scored, as players walk out and so forth. What do you think of this, and how will it bring crowds back to Lionel?
I think it’s a great idea. Something similar was introduced at Manly a while back, and it creates a kind of buzz around the team. Hopefully along with us playing good football it will make an atmosphere at Lionel that will get more juniors and people coming to watch.

What are your future ambitions with your football?
Stay at PL’s for another 10 years or so, injuries permitting.

Favourite player and why?
Ronaldo (Brazil)- deadly in the penalty box
Zidane- the classiest player ever
Messi- the best player of all time